Friday was the third and final day of the QCon conference.

On Friday, I spent most of the day in the Domain Driven Design track, hosted by Eric Evans. The first speaker was Tim McCarthy, who has recently written a book on using DDD with.NET and C#. Tim raised an interesting question with his talk: How do you keep your domain code clean when working with frameworks? By frameworks, Tim meant broad frameworks like ASP.NET as well as more narrow, application frameworks like SharePoint. The challenge is that with frameworks, and especially the wizard/designer approaches to coding sometimes advocated by Microsoft, it can be really easy to become inappropriately coupled to persistence, specific APIs, etc.

Unfortunately, Tim had a couple of problems in his presentation that made it less valuable to me than it might have been. The first problem was being sort of backward in terms of audience (for me at least). He worried about whether people knew what SharePoint was, but breezed over DDD terminology. The second problem was getting bogged down in details of code from a real-world system. I'm sure that there were good ideas in there, but they were hard to see because of the context that needed to explained. There's always something nice about real code for demonstrating a point, but in a presentation, maybe simple examples would be better.

Ultimately the point was that DDD provided strategies for a decoupled system.

I met Phil on Tuesday over lunch, so I was looking forward to hearing his presentation. It got off to a rocky start due to technical difficulties. The number of Macbooks at this conference really drove home the point that this wasn't a Microsoft conference, but after a couple of failed attempts to get the presentation going with different Macs, Martin Fowler (whose machine was one of them) quipped that Macs being so superior is bullox.

Once the presentation got underway, Phil gave a little background about the Guardian. The newspaper has its roots in the 18th century, and is now the largest online newspaper in Europe. They put their first web site up in 1996, but over the years the system became problematic:

To rebuild the site such that it would be "of the web, not just on the web" and ready for the future, they took an ambitious strategy of going agile, using new technologies and different design approaches (DDD). They got some help from ThoughtWorks to make it up the steep learning curve involved in such radical change.

Phil shared a few things they learned along the way. One thing was the importance of using the language of the problem domain everywhere, which allowed even the non-technical people on the team to contribute in unexpected ways. An example of this was a big breakthrough in terms of object composition. Phil showed an original object hierarchy and a much cleaner one. He said that of course, big breakthroughs always seem obvious and trivial in hindsight, but it was a non-engineer that came up with it. Another example he cited was a time when one of the users came over to a developer's machine for a feature demo. While the develper was getting things set up, the user looked over his shoulder at the code and commented, "Does this do what I think it's doing? If so, that's not right." Because the code used the domain language for object names and methods, he was able to understand it well enough to spot a bug.

Another thing Phil and his team learned is that the database schema is not the model. The model is the code -- even though sometimes people get a false sense that if something isn't in the database, it isn't really the model.

He also talked about the utility of "value" objects. In Domain Driven Design, "entities" are the big stars, representing the main business objects. But it can be really valuable to have small, simple objects as helpers to the entities. These are objects that might just be represented as a string or an int, but if you discover some logic associated with that particular kind of string or int, encapsulating that logic into a slightly more specialized object can result in simpler entities. 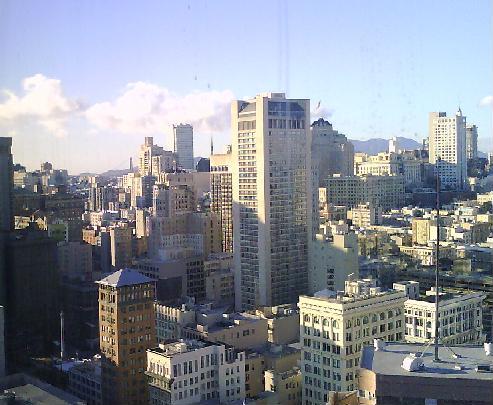 I took a break from the DDD track to hear a little about the architecture of Facebook. Aditya is the director of engineering at Facebook, and after hearing his presentation, I came to a couple of conclusions:

Facebook is built on the LAMP stack, but pretty much every component has been customized and optimized for their particular application. They also use memcached, which Aditya said was a huge factor in the performance of the site. This agreed nicely with Tim Bray's talk from the other day: databases are too slow for this kind of scalability. Aditya said their memcache distributed hash table consumes 25 terabytes of RAM.

When asked if they intend to submit their changes to LAMP components back into the main projects, Aditya said, "I don't think they'd accept our hacks," which got a chuckle from the audience. The slightly cynical part of me thought, that'd be an interesting way to keep from having to share GPL changes: saying, "Naw, you wouldn't really want this hacked up stuff..."

Back to the DDD track, to hear "Mr. Domain Driven Design" himself. His premise for this talk was:

Not all of a large system will be well-designed.

We wish it isn't so, but it just seems to be a fact of life. He then talked about the oh so common situation that a development team finds itself in. We've got this legacy system, and it has all the problems that typically make us unhappy with legacy systems: poor design, old technologies, accidental complexity, etc. So what do we do?

Plan A: Scrap it and start over. Eric had a diagram showing the big ball of mud becoming this beautiful pyramid of a system. What ends up really happening? Everything seems fabulous at first as a solid base gets built up. Then, at the point where parity with the legacy system is supposed to appear, panic sets in. The is the classic case documented by Joel Spolsky where you suddenly realize that all that seemingly pointless cruft was actually important. So you finally end up with a system, two years later, that does exactly what the original system did, and that final phase of "add cool new features" never seems to happen.

Plan B: Refactor. Eric argued that this approach doesn't really work either. There aren't enough tests to really work something over, and while you're trying, other people are continuing to hack the code base and mess up your perfect plans. He joked that the hackers are irresistibly drawn to the code that you just cleaned up.

Plan C: Plan to hack, since that seems like what will happen anyway.

Leaving behind the plans for a while, Eric talked about the different parts of the domain. He said that this is covered in chapter 15 of his book, but I'll try to summarize as I understood it from the talk.

The biggest part is the generic subdomain. This is all the framework and code that is pretty generic and applicable across the whole software development practise. Next is the supporting subdomain, which is code that starts to be more specific to the problem domain you're working in, but could still be applied somewhat generically in a specific industry. Finally, the smallest bit, is the core domain. This is what makes your system worth building in the first place. This is what gives you your competitive advantage. This is why people will buy your stuff. Another perspective of the three levels is stuff you buy, stuff you outsource, and stuff you build, respectively.

Plan D: Distill the core domain from the ball of mud. Instead of considering the legacy system a liability, look for the assets. Build what Eric calls an Anti-Corruption Layer, which sounded kind of like the façade pattern to me. Instead of transforming the ball of mud into a beautiful pyramid, focus on building the very cap of the pyramid (the core domain) and making that beautiful, while connecting to the ball of mud as necessary, but with a clear insulating layer.

This topic is really intriguing to me, but I can't say that I understand how to apply it. Eric remarked that all of this stuff is in his book, but being toward the end, some people don't, uh, quite make it that far. Guilty as charged. Well, although I've got the book, I haven't really made a serious effort to read it yet. Maybe it's time to fix that. 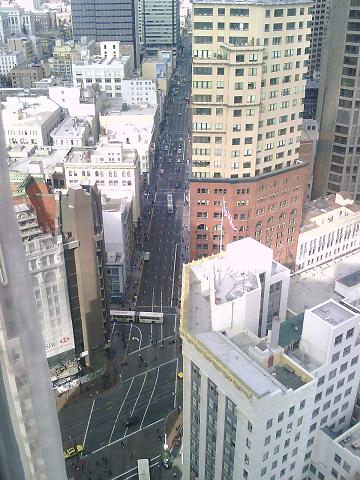 Since Eric Evans' talk was so good, I thought I'd finish out the day with the last talk in the DDD track. This was by David Laribee, who is billed as the ALT.NET ring leader. ALT.NET is a community that I'll unfairly and over simply summarize as "I can write C# on a Mac".

Dave's talk was about keeping the model clean, given that it has to be exposed to the unwashed masses to be useful. Or something like that. Maybe after three full days of presentations I was just full, or maybe Dave wanted a cool presentation more than a pragmatic one, but I had a hard time following this one. It started out at a high philosophical level, and by philosophical I mean classically so: Plato and Aristotle. It ended with C# 3.0 extension methods. I'm sure I'm not doing it justice.