By Chance - Can Order Come Out of Randomness?

A few years ago I was reading some books about biological evolution. At some point, probably reading something by Richard Dawkins, I was thinking about randomness and its ability to produce apparently non-random things. All you need is a little pressure that selects one random thing over another. So I wrote a little program that demonstrates the idea by transforming a black box into a picture through entirely random steps.

My program, ByChance, works like this. You supply an image that represents the ideal in survivability. Once you've done that, you click the "Start" button. The program starts with a black image with the same dimensions as the "fitness" image you picked. It then proceeds to pick a pixel in the image at random (around 200,000 possibilities, depending on the shape of the image). Then it picks a random color (24 bits, so there are around 16.8 million possibilities) for the random pixel and tests the survivability of the new picture. If the new picture is more like the "fitness" picture than what was there previously, the new picture, with its single different pixel wins. If not, what was there before wins. The program displays the winning picture, and also keeps a running total of the number of generations that have happened. A generation is every time a pixel changes and the fitness test is done. 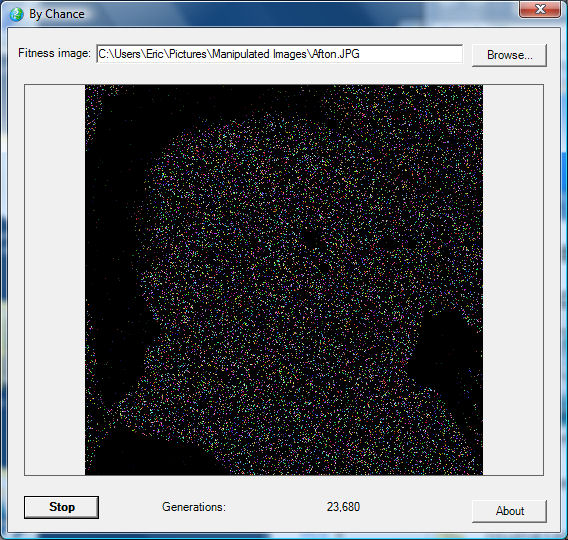 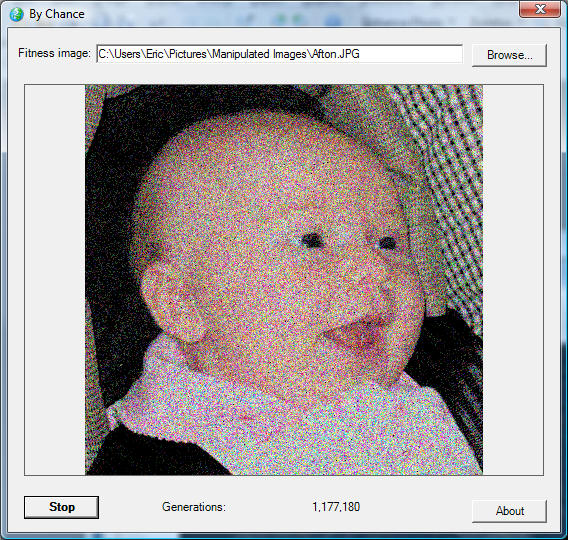 I'm certainly not an expert in evolutionary theory, but it seems like the program serves as an interesting analogy. I should point out that evolution doesn't have a perfectly ideal goal that it is shooting for like the fitness image. Given the forces of nature around us and all the aspects of our environment, there is pressure toward a survivable form.

Some of the choices I made in writing the program were arbitrary:

Maybe something a little different would be a better analogy of our best understanding of what really happens. This experiment is kind of related to the infinite monkey theorem, but with not so many permutations and with pressure toward correctness.

After running the program several times, I've noticed a couple of things.