QCon is a software development conference sponsored by the InfoQ site and software consultancy Trifork. I am in San Francisco attending it, and here is a summary and some thoughts on the first day's sessions I was able to attend. 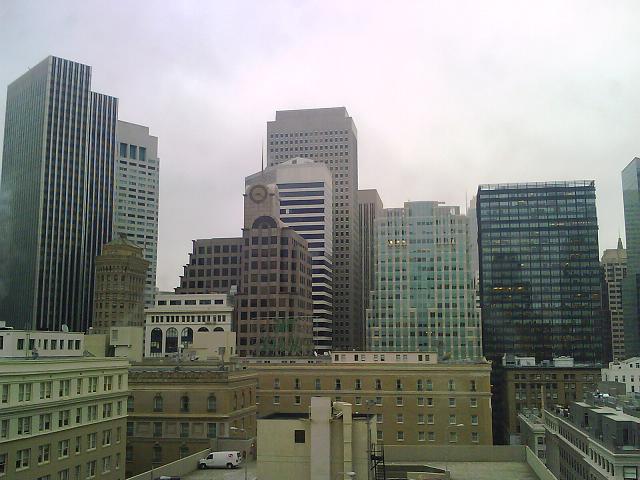 As much of Martin Fowler's stuff as I've read, I hadn't ever heard him speak in person. He and Rebecca talked about software architects, including some of the stereotypical ivory tower thinkers that come up with beautiful, elegant systems that have no possibility of actually working in the real world. A video clip from The Matrix Reloaded set the tone: the architect of the matrix considers Neo to be an aberration in his otherwise mathematically perfect construct.

Part of the problem with architecture is that it is hard to define. It may be simply design when we want to make it sound more important. I remember a guy I used to work with for whom everything was architecture. "If you think about the architecture of these two classes..." Martin liked Ralph Johnson's definition of an architect as the person who thinks about the hard stuff -- whatever that happens to be for a particular organization.

Another problem is that architects have a hard time defining success for their role, and an even harder time attaining it. Sometimes that's because of organizational dysfunction, like companies that insist that architects not write any code. Other times it is through poor practices, like inventing frameworks in anticipation of a yet unproven need.

The speakers emphasized, however, that architecture has a useful role in spite of some of the difficulties with having it filled effectively. The architect is the one who worries about supportability, rampant proliferation of tools, and keeps in mind the grand vision of the product. They are also responsible for the quality of the code, which is not just an abstract, academic thing once the code works. The quality of the code has a real cost that is realized when new features need to be added. It can be hard to make that cost visible to people, but one approach suggested might be to give two estimates: one for the new feature built into the mess we've currently got and one for the imaginary clean system we wish we had. I don't know, that still sounds kind of hard.

John is the founder of Programmableweb.com, a sort of catalog site for various APIs available over the Internet. In his presentation, he talked about trends in web APIs. Some trends are technical such as the rising use of REST vs. SOAP (though since REST is more a philosophy than a standard, it can be hard to classify something as REST as opposed to REST-ish). Other trends are around the ubiquity of APIs -- it is now expected that if you put useful functionality on the web that it will have an API, and not just a user interface. Even media producers like The New York Times and NPR have APIs.

What makes a good web API? First and foremost, the underlying service has to be valuable. Beyond that, the API should support the business model of the provider (eBay wants to optimize adding listings since that's how they make money) and should be easy to access both in terms of openness and the developer support provided. 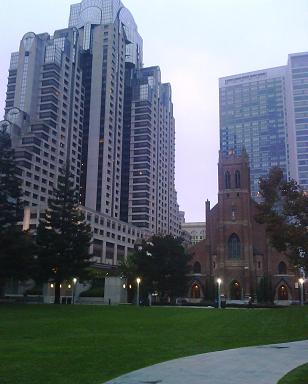 Scott is the CEO of Vertigo, a consulting firm that was named Microsoft partner of the year for 2008. It was nice to have some Microsoft technical representation since the conference so far seems heavier on the Java side. Scott spoke about building the Hard Rock Memorabilia site working with marketing firm Duncan/Channon. Duncan/Channon originally intended that the site be done using Flash, but Deep Zoom turned out to be the killer feature that made Silverlight the clear choice.

Scott said that the Silverlight story of independent graphic design and programming is completely playing out as advertised. He showed a little demo of an Etch-A-Sketch app that Vertigo programmer Michael Moser quickly coded up, but was then beautifully skinned by a graphic artist.

Scott also asserted that the adaptive streaming of video in Silverlight gives the best video on the web.

One interesting tidbit on the Hard Rock site is that Vertigo spent some significant effort getting a set of different sized pictures to line up in such a way that the final arrangement creates a nice rectangle. This looks like possibly a variation of the packing problem to me.

Also interesting was that Scott was using a Mac with Vista running in a VM. Come to think of it, all the presenters in the RIA track seemed to have Macs.

Flex and AIR in the Trenches (Scott Delap)

Scott Delap gave a presentation about using Adobe tools to build some online components of a video game, League of Legends. His perspective was comparing Flash/Flex to doing Java UI development with Swing. He seemed reasonably happy with the platform and development tools, but thought that things felt sort of like Java year 2000. That is, not quite up to state-of-the art. He is, however, a convert to declarative UI specification. Like the Java UI developers I've known, he never really trusted visual designers for Swing, but says the designer experience with Flash is great.

This talk covers some of the same material that is in Neal's book The Productive Programmer. I sort of got the impression that maybe after writing a book and giving this presentation who knows how many times that Neal might have lost some of the passion associated with this topic. That's not to say that the presentation was dull, it just seemed a little like, "OK, here we go again..."

Neal's 10 points were mostly things I know (and even do successfully at times) such as TDD, using static analysis, YAGNI, etc. There was an interesting point on polyglot programming. He said that polyglot programming ideally doesn't mean multiple platforms, but multiple languages on a single platform. Java and .NET are both multilingual platforms, so take advantage of that to use the best language for the problem at hand while still keeping the benefits of a common runtime environment.

As an intermission, Neal talked about 10 bad smells, my favorite of which was "Our lawyers say we can't use any open source software", which led to Neal having to buy a "license" for CruiseControl (written by Neal's employer, ThoughtWorks) so he could use it with a client. 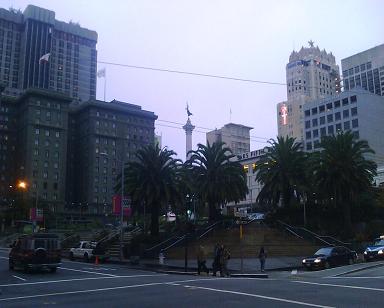 In short, Alex and his team love GWT. And I have to say that seeing Blueprint in action was pretty spectacular. It really looked like a desktop application, but done entirely with HTML and Javascript. GWT is the magic behind it all, which is Google's toolkit for compiling Java to Javascript.

If you work in a Java shop, it seems like a great development story: use all your familiar tools and write Java code and you get a great web app.

Kent Beck, like Martin Fowler, is another industry heavyweight that I first heard speak today. He got started a little late because his talk came right after the break in which beer was served, and I guess it's hard to compete with that. Being a non-drinker, I had a seat right up front.

His talk was as an amateur futurist, looking at trends and imagining where they might go, and unintended consequences. For example, what happens if you extend the trend of releasing software more frequently? Maybe releasing software with every keystroke? Well, OK, editing a live web site would almost be that (if your editor saved continuously).

Some other trends he expects are the end of "free" stuff on the web, and a decrease in status for programmers as other people begin to understand technology more and programming seems less mystical. Even if that latter point proves true, he says that we can still make a difference in the world with what we build, and how we build it.

Thinking of the Brazilians that were recognized in attendance, I flinched a little during the talk when Kent digressed slightly about how his son says "cool", but to be really cool leaves off the 'L'. There's another unintended consequence for you, riffing on a word that is vulgar in Portuguese.