For those of us poor folk who didn't make it to PDC this past fall, Microsoft has been taking the show to us in the form of its MSDN Unleashed series. Rob Bagby, developer evangelist, came to Salt Lake City to present and give updates about new and upcoming technologies for developers. 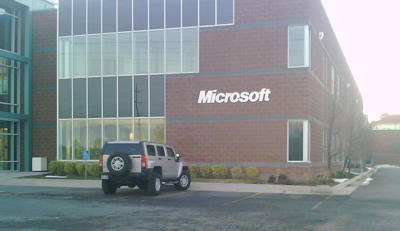 Rob's first presentation introduced what the C# team is working on for the next release of the language. A lot of the focus is around exposing support for dynamic programming and interoperability with dynamic languages like Python and Ruby. This is done by deferring the evaluation of method and property calls on some objects until runtime. At compile time, the normally strict static type checking of the C# compiler is relaxed when a method call doesn't seem to exist in order to allow for the possibility that such a method will be added dynamically sometime during program execution. To indicate that this behavior is wanted, you use the dynamic keyword like this:

At run time, whatever actual object is stored in "customer" needs to have a property "FirstName" or an exception is thrown. Otherwise, the actual type is unimportant. This is also known as "duck typing" where capabilities of objects are more important than actual types -- if it looks like a duck and acts like a duck, it might as well be a duck.

Some people in attendance were confused about how the dynamic keyword differs from var. The var keyword really just saves keystrokes -- the type is still static but figured out by the compiler. Objects that are dynamic however, have their method calls bound at run time.

The ability of C# to handle dynamic types also makes it easier to interoperate with Javascript. Rob showed a Silverlight application that called out to Javascript functions pretty much identically to calling regular C# methods.

The next version of C# will also have default and named parameters, which have been supported in other .NET languages, and will make COM interop a bit nicer. I've written a bunch of calls to Office where it seems like you're passing in ten-thousand Type.Missing parameters to some of the methods, and that will no longer be required.

Shawn Burke, one of the guys behind the AJAX Control Toolkit, is now heading a team to create Silverlight controls. This presentation showed the controls that they are working on, and described the distribution model.

The controls are things like AutoComplete, NumericUpDown, TreeView, DockPanel, WrapPanel, and others that would be really useful in building a typical modern GUI application. There is also charting support, which Rob said comes fairly mature by virtue of Microsoft's assimilation of Dundas code and engineers. There is also support for theming applications.

My coworker, Ryan Jameson, went to a Microsoft event last year where the REST Starter Kit for WCF was one of the topics. He came back saying with a smirk that Microsoft had apparently invented REST, the way they had presented it. Rob implied no such thing, even joking that in every presentation about REST, there are people ranging from those who have never heard of it, to those that know Roy Fielding's middle initial (which would be T, by the way).

REST is a philosophy for providing web services in a way that embraces the "way of the web", such as:

Rob asked rhetorically if these principles might work OK given the success of the web, and summed up the philosophy by saying, "If you use GET for something other than getting a resource, you're Part of the Problem." And don't even think about using POST to get something.

I haven't done more than play around with web services, but it seemed to me that by using URI templates, WebGet and WebInvoke attributes, and WebProtocolException, you could suffuse a high degree of RESTiness into your WCF web service.

Things got pretty loose in this presentation, with Rob dodging pot shots about IE and standards conformance, switching to a Mexican accent for a bit of the delivery, and demonstrating that Notepad is a REST client. Kind of fun.

The last presentation was a lot to grasp, as Rob warned it would be. The denotation of "azure" is the blue of a clear or unclouded sky. But Microsoft's Azure is about cloud computing. What does that mean?

Azure comprises a huge pile of stuff, which makes it pretty hard to talk about in a meaningful way. Hearing the presentation reminded me of when .NET was first announced. Everything at Microsoft was .NET then: Visual Studio .NET, Windows .NET, Clippy .NET, etc. The short version is that Azure combines typical operating system facilities with utility computing. In one sense it sounds like outsourced IT, where you let Microsoft worry about the data center, dynamically scaling resources as needed. But it is also more than that -- an umbrella of networked stuff covering the "Live" services, SQL, raw data storage, and much more.

Rob says that Azure is Microsoft's big bet right now. I wonder if things will settle down a bit when Microsoft gets a more fully-formed vision, much like they did with .NET.