The NSA Questions My Lifestyle

The National Security Agency (NSA) has a video about their polygraph testing, which was critiqued by AntiPolygraph.org, and recently reported about on Slashdot. In 1991, while still a college student, I applied for a summer internship with the NSA, so I got to take one of these tests myself. The official results were "inconclusive", but I think they suspected that I was secretly gay.

I also got a free trip to Maryland for interviews and screening. For example, there was a psychological evaluation wherein they used sly and subtle questions to determine if I was suffering from some psychotic disorder, like "True or False: People are out to get me" and "True or False: I think Nixon was a good president."

For one portion of the interview, I was escorted into a real working NSA building at Fort Meade. There were red flashing siren lights on the ceiling and lots of people scurrying about yelling things like, "Red badge in the area!"  It was all pretty exciting -- what kind of crisis could possibly be underway? Then I realized that it was all because of me. A "red badge" is a visitor without a security clearance, and they had to be sure no one accidentally disclosed the location of the secret box from Sneakers or something.

The polygraph test was pretty much like they say in the NSA video. They tell you word-for-word what all of the questions will be in advance, and they are all yes or no questions. The questions are in one of two categories: (1) stuff they already know, and (2) stuff they want to know. In the first category are things like my name and address -- that is, "Is your name Eric James Smith?" These are all to be answered "yes", and set a baseline. Stuff they want to know includes things like whether I've used illegal drugs, if I intend to divulge classified information to foreign spies, and whether I've engaged in any adult homosexual activity.

Early in the test, the examiner asked me if I lived at such and such address, to which I honestly replied, "No". There was a little confused silence that I wasn't allowed to remedy since I was just supposed to answer the questions. Eventually he figured out that he had read my address wrong. After that, things went pretty smoothly.

"Have you engaged in espionage against the United States?"

"Have you engaged in any adult homosexual activity?"

"Is your name Eric James Smith?"

And so on. Most of the questions were repeated a few times. The one about homosexuality seemed to be coming up a lot. After answering it truthfully several times, it came up yet again. Oh my gosh! He thinks I'm gay!!! Somehow a simple yes or no question, when repeated enough times, starts to sound like an accusation. It's like, "I don't believe your last response, so let me give you another chance. The truth this time!" Did I have some kind of physiological response on that one? I'm surprised the machine didn't burst into flames like in The Simpsons. Even though I'm not secretly/openly/questionably gay, I'm sure there was a big spike on the chart when I suddenly thought that he thought I was lying.

Here's a copy of the official polygraph report, which I got by filing a FOIA request several years later (gray redactions mine, black redactions theirs): 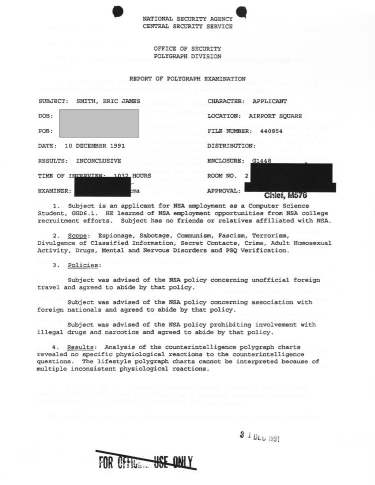 In the end, I didn't get the job. Maybe it was because I had lived at 15 different addresses in three countries over the previous five years, along with travel to three additional countries, and nobody wanted to background check all of that for an intern. Maybe I wasn't a brilliant enough computer scientist. Or maybe they just didn't trust that my lifestyle was in-bounds.