Today's PyCon was a lot about meeting people. I hadn't really anticipated that, but it was a nice surprise nonetheless. But first things first... 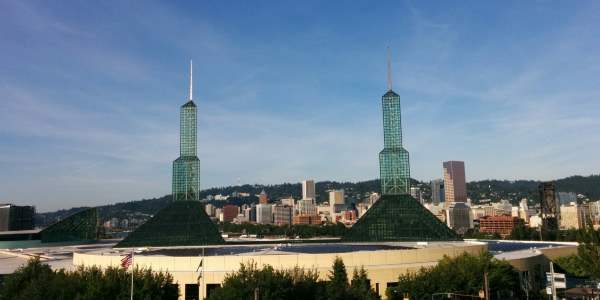 There were two sets of lightning talks today, book-ending the rest of the events. One interesting one was about using Minecraft to teach Python. That could definitely be a way to approach my kids about programming.

Guido gave a small "state of the language" talk in which he shared some of the new things that are out in Python 3.5 (better coroutine support, matrix multiplication, new unpacking syntax and gradual typing). Things coming in 3.6 are yet another way of formatting strings (which actually looks pretty cool), a protocol just for file system paths, and a cryptographic random number module called secrets.py.

He also said that Python's source repository will be moving to GitHub later this year. It wasn't too long ago that Python moved from Subversion to Mercurial. The thought was that Mercurial seemed more similar to Subversion when compared with Git, and nobody could figure out Git's branching. But times change, and Guido said, "Everybody knows Git branching, and somehow everyone is born with a GitHub account." So Git it will be.

The future beyond 3.6? Who knows? Maybe the GIL will be removed. Ha.

He also acknowledged a typo of "femail" in his last year's keynote, and despite spelling errors, is still trying to find women who want to be core contributors to the language.

The rest of Guido's talk was taken from a speech he had given to Dutch officials in a "King's Day" event, and was mostly autobiographical and about the history of Python and the community that has led to its success.

Parisa works for Google on the Chrome project, and has the title "Security Princess". She talked about hacking as a skill set and mind set. Whereas the engineering mentality is to figure out how to make something that works, the hacker mindset is to push boundaries and use things in unintended ways. She feels like developers should foster the hacker mind set in order to make things better.

She shared the site http://xss-game.appspot.com, which is a game created by Google to teach you how to find cross-site scripting bugs, which looks like fun.

Click is a library for creating CLIs written by Armin Ronacher, the creator of the Flask framework. It looks pretty cool, using a decorator approach to parsing and validating arguments. While not a focus of the talk, there was mention (and some strong audience support) for docopt, which is yet another alternative to the standard ArgParse module. I'm interested in taking a look at that as well. 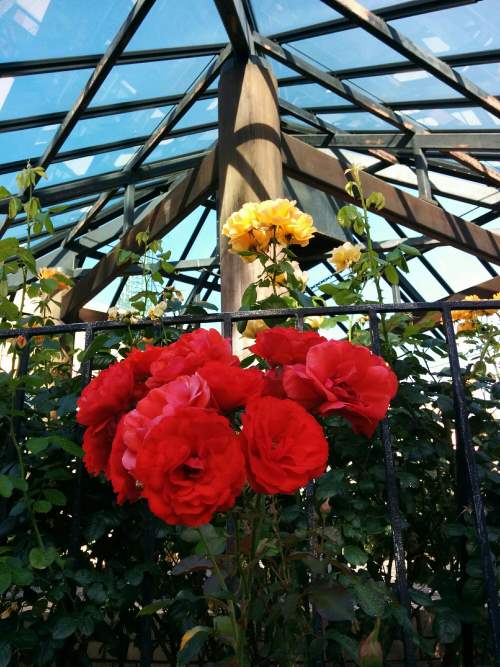 I've been listening to a couple of Python podcasts for a while: Talk Python to Me and Podcast.__init__. The hosts, Michael Kennedy and Tobias Macey, held an open space that I attended with dozen or so other people to meet them and chat about their shows.

It was kind of fun to attach real people to the voices I've heard, and hear some details about the process of getting guests and recording their shows.

This is one of the talks I was most interested in going to. Getting applications shipped to users is certainly an area of weakness for Python, and something we struggle with at work. Furthermore, the talk was given by Glyph, the creator of the Twisted library, and when you have such a cool first name as Glyph, you can just go by that.

I had hoped that the talk would focus most on shipping applications to end-users, but he covered the whole gamut of getting Python code into "production". It was all good stuff, though, including dispelling the myth that if you're using Docker you don't need to worry about isolating your Python environment from the container.

He did mention cx_Freeze, which I've been investigating, as well as some other projects like it that I'm aware of and decided not to pursue because of lack of cross-platform support or Python cross-version support. I fully agreed with his statement of application developers' goal: to make our users not care about Python. Shipping a Python application should be like shipping any native application. He said that it really isn't that hard, and we shouldn't go out and rewrite our apps in Go because of a few bumps.

Daniel (my coworker also attending the conference), my son Ethan and I literally chased Glyph down after his talk to ask some more questions. Mostly, is what we're doing -- namely shipping Python apps to Windows and Linux -- so unusual that the tooling can be so rough? He didn't think our situation was rare, but pointed out the realities of open source software projects. Sometimes someone has a need that they meet with some code, and share it to the world. Then tons of people start using it and it becomes overwhelming, and a mostly thankless job.

He (and Augie Fackler, who also joined in the discussion) pointed out the great strides recently with the Python Packaging Authority, but they're mostly ignoring the cx_Freeze scenario for now. I guess maybe it is a situation where if I want improvement, I need to pitch in.

After the conversation with Glyph, we'd already missed much of the next talk we planned to attend, so Ethan and I wandered toward the exhibit hall. We happened upon Guido chatting with a small group of conference attendees. He was wearing a shirt that said, "Python is for girls" in support of his desire for greater diversity in the community. I asked him if I could take a picture of it, since my 10 year old daughter tends to think programming is kind of a boy thing. Guido said that what I needed to do was to absolutely forbid her from doing any programming, and that would pretty much seal the deal of her getting interested. 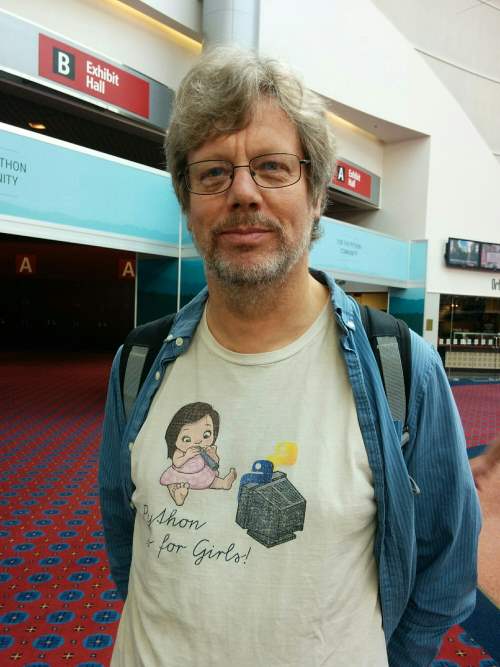 Also in that little group of people was Luciano Ramalho, author of Fluent Python, which I happen to be reading right now. He gave some advice about reading strategy since it is such a thick book -- to kind of treat it like several separate books. I told him I was reading the ebook version, so I hadn't realized that I should be intimidated by it's length. I also got to speak a little Portuguese since Luciano is from Brazil, where I was a missionary for a couple of years.

I was also delighted to meet another author who appeared there, Bruce Eckel. I told him about reading his Thinking in Java book years and years ago, and we had a nice chat about the fact that he's also a Python enthusiast, and that he hopes to write a book on Python concurrency soon.

I've also passed people in the halls and done double-takes because they're speakers whose talks we've watched at work. It somehow feels like encountering a TV star, even if celebrity in the Python community isn't quite on the same level :-)

From developer to manager - Sean O'Connor

I went to this talk because of a more formal leadership role I've been playing at work. Sean made the comment right up front that there might be a couple of animated GIFs in his slide, which turned out to be an understatement. The talk was fun and approachable.

One key bit of advice he gave: Think about what makes you happy at work, and get more of that. That can help you decide if pursuing management is even a good idea compared to staying purely on the technical side.

Katie works for an Australian company that develops educational software for school kids. The software uses the turtle graphics module from Python, and then has an automated way of giving feedback on the assignments based on whether the finished drawing matches the assigned drawing.

She talked about the challenges and algorithms of doing vector graphics diffing, and trying to optimize performance. In a twist on the conventional wisdom of optimization, she said that changing to different algorithms didn't help, just writing a critical piece in C did.

This talk had smatterings of the fixed vs. growth mindset ideas, but went down the path of contribution to open source projects. It is really a clever idea: If there is a programmer that you admire and want to learn from, what better way than to contribute to their project and learn from the feedback you get on pull requests?

The evening lightning talks were fun. José Castro posed the question, "What if you did 'chmod -x chmod'? How could you fix it?" Then he showed various crazy ideas of how to change file permissions when you can't run the primary tool for doing so.

There happened to be two Nathaniel Smiths that spoke, and one talked about generative poetry with a project called prosaic. It was fairly entertaining to see poetry generated from the scripts of movies.

Ian Lee, the maintainer of the pep8 tool, let us know that it is being renamed to be "pycodestyle" at Guido's request.

There was even a talk about pythons the snakes rather than the language. Takeaway? "Punch bite" would be an awesome project name for something...

The most entertaining talk was by Larry Hastings, "My life as a meme". Apparently there is this thing called "speed running" where people play classic video games to get through levels as quickly as possible, and they broadcast people doing this so that a hundred thousand bored teenagers can watch. Larry happened to go to one of these events as a spectator, and between plays, the camera was turned toward the audience. Larry was sitting there playing a video game in the front row, and these hundred thousand bored teenagers dubbed him #dsdad and turned him into a minor celebrity.