Review of "The Body: A Guide for Occupants" 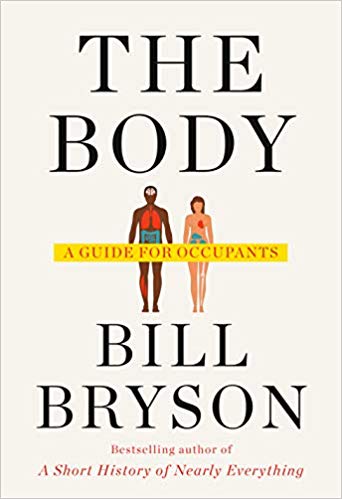 Douglas Crockford, in JavaScript: The Good Parts said, “Computer programs are the most complex things that humans make.” As someone who builds software, that idea can make you feel pretty good about your intellectual place in the world, because even though I don't know how lots of software works, I feel like I could probably at least figure it out. After reading The Body: A Guide for Occupants by Bill Bryson, though, I've come to the humbling realization that one of the most complex things ever made is humans.

The book is an overview of how our bodies work, and the circuitous routes doctors and scientists have taken to come to that understanding. What is abundantly clear, however, is how much there is yet to learn. If you're an aspiring scientist in search of unanswered questions, the human body is full of them. "Nobody knows," was a pretty common refrain in the book. In some cases, there are scientifically untested ideas and assumptions, but history is littered with people who were tragically wrong, inflicting unnecessary suffering and even death on people they were trying to help.

George Washington, for example, after coming down with what might have been a bad cold or throat infection in 1799 was treated by doctors who bled him, induced vomiting, and performed other deleterious procedures until he was dead. More horrific, and much more recent, was Walter Freeman performing lobotomies in the 1940's and 1950's, basically by hammering an ice pick into people's brains and wiggling it around. This was a treatment for anyone "with almost any kind of perceived mental or social aberration" including phobias (p. 66).

Some pioneers in physiology and medicine were soundly ridiculed for preposterous theories that later turned out to be correct, earning their authors Nobel Prizes after the scientific community came around many years later. It goes to show that sometimes distinguishing between horrible and brilliant ideas is harder than you'd think.

In addition to describing the functions of the body and history, the book also does a fair amount of myth-busting. I've known that the recommendation to drink eight glasses of water per day is bogus for quite a while, but I had read recently that thirst is a much better and simpler indication of how much to drink. Also apparently bogus, according to Bryson: "Thirst, curiously, is not a reliable indication of how much water you need. People allowed to drink all the water they want after getting very thirsty usually report feeling slaked after drinking only one-fifth the amount they have lost through perspiration" (p. 238).

In taking care of our bodies, Bryson makes the observation that, "Roughly 40 percent of people with diabetes, chronic hypertension, or cardiovascular disease were fit as a fiddle before they got ill, and roughly 20 percent of people who are severely overweight live to a ripe old age without ever doing anything about it. Just because you exercise regularly and eat a lot of salad doesn't mean you have bought yourself a better life span. What you have bought is a better chance of having a better life span" (p. 247). But clearly the chances are pretty significant if 80 percent of people severely overweight didn't live to a ripe old age.

One minor thing I didn't like so much was the way references were done. When encountering something surprising, I would have liked to have looked at the sources, but there is no indication in the text where some information comes from. Instead, the Notes on Sources are at the end of the book, with page number references back into the text, but it is often hard to align the note with the precise section of text to which it applies.

Overall the book was fascinating and enjoyable to read, though in keeping with its theme, almost certainly wrong in some respects that we've yet to discover.