I set up an eero Pro 6 mesh network in my house this past week. These are my first impressions of the system.

Earlier this year, my employer decided that the pandemic-motivated "work from home" policy would continue indefinitely for the engineering department. After moving a few PCs from the office to my house, I started thinking about isolating the work machines from the rest of my network. I figured I'd have a router just for them, using my aging Asus RT-AC66U for that and getting a newer router as the gateway for my whole home network.

My first thought was to get another Asus, since the current one did a fine job, and the RT-AX86U is a well-reviewed candidate. Unfortunately it was sold out everywhere unless you were willing to pay a $100 premium over MSRP. B&H Photo at least let me back-order one, so I did that and waited, and waited, and a month or so later decided to cancel the order when there was no indication of when it might be fulfilled.

Doing some more research, I read an article about mesh wireless routers. I'd had the impression that some of those were dumbed-down "consumer-y" products, and I was more wanting something in a "pro-sumer" category. The article said good things about routers from eero, a subsidiary of Amazon, so I did some research to see if those could do the things that I wanted:

I quickly gravitated to the eero Pro 6 which has 3 access points supporting (up to) gigabit wireless connections. It is recommended for coverage of 6000 square feet, which is overkill for my house, but the fact that each access point has ethernet ports opened up interesting possibilities.

I have a "home" office and a "work" office in the house, which makes it easier to keep a clear distinction between being "at work" or not. I've always had my cable modem and router in my home office since that's where most of the high-bandwidth equipment has been, but I've occasionally suffered from poor internet connections. The Comcast tech that checked things out when my connection was especially spotty speculated that I had a crappy coax splitter in the house, because the signal was dirty in the office, but clean in other areas of the house. Unfortunately that splitter would be in a wall somewhere, and I would probably need to hire an electrician to find and fix it.

With three access points from the Pro 6, I could move the modem to a clean area of the house, then use the ethernet ports to plug in a switch in the home office, and the old router in the work office. Clean internet, and fast wired connections between all the machines in each office. Sounds great!

Except that the eero Pro 6 was sold out too! Good grief. Amazon let me back-order it, and it actually showed up in just under two weeks. That seems long when spoiled with Amazon Prime, but acceptable for something that wasn't in stock. They also did a decent job of keeping me apprised when I'd get it and then beat their own estimate. 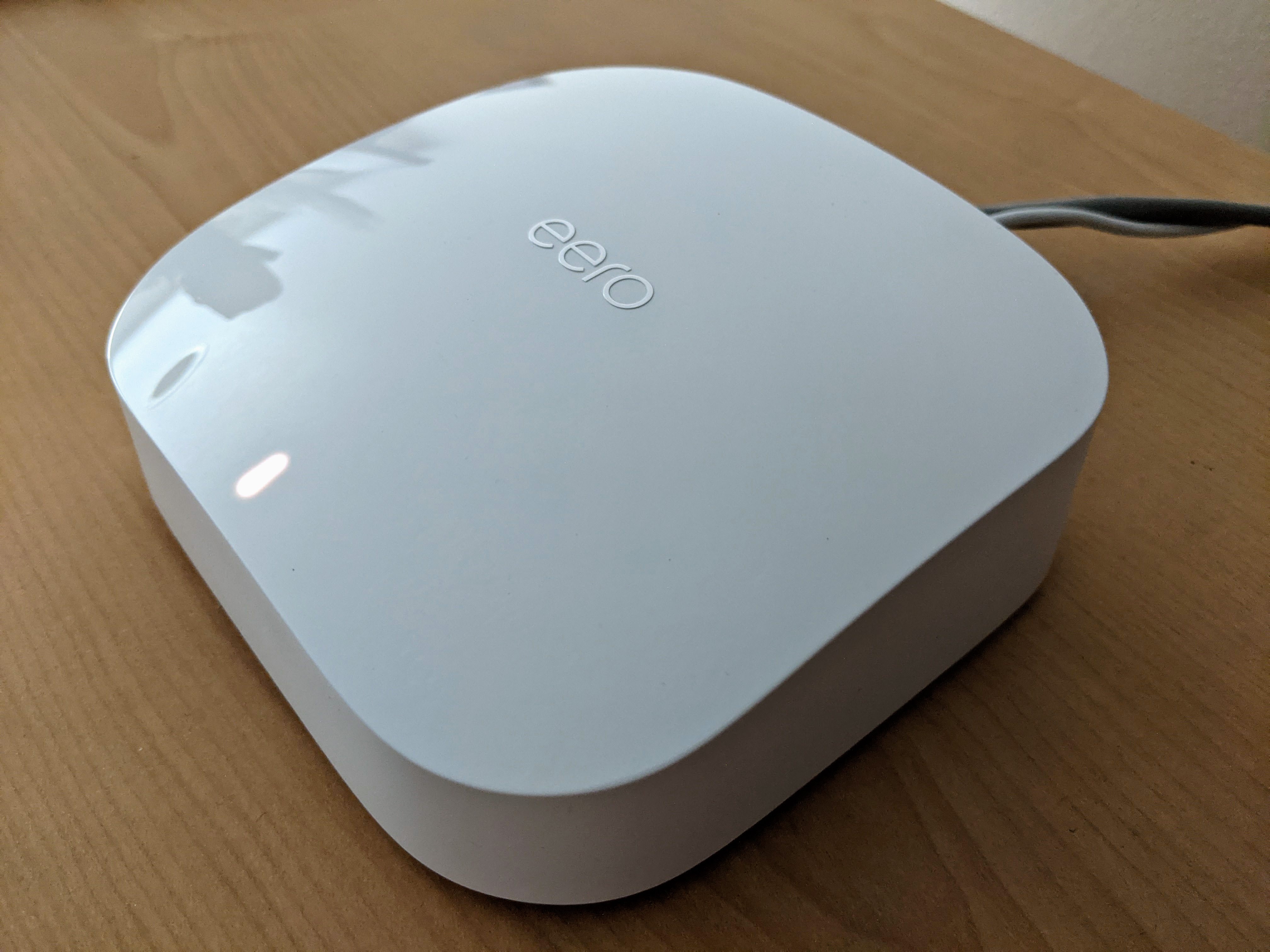 Unlike all the previous routers I've owned, eero devices don't have a web interface at the gateway address. Instead you need to use their mobile app to set it up and administer it. I was a bit worried about that at first, but it has turned out OK so far. I did the initial setup with my phone because something I'd read in the shopping phase suggested that you needed an internet connection for the initial setup. There's something perverse about that (but I didn't actually verify that it was true). I've since installed the app on my tablet, because big screens are right and good.

One of the very first setup questions the app asked was "What do you want to call your network?" Hmm... Is it asking me what I want the wireless SSID to be? I've usually had separate ones for different bands (like a "_5" suffix for 5 GHz). How do I answer this question!?!? Whatever, I figured I'd be able to change it later if needed, so I put in an "unadorned" name. It turns out that the router can serve all its bands with a single SSID, so having different ones is unnecessary. Huh. That's kind of nice. There's even a setting called "Band steering" which is described as "Improves performance by encouraging capable devices to connect to 5 GHz." Yes, please.

The overall setup process went smoothly. Basically plug in an access point and let the app discover it. It did automatically start a trial of the Secure+ service, which I'm not really interested in paying for since I get the features I'm interested in with my Pi-Hole DNS server. I did have to disable the "Advanced Security" features (in the "Discover" section of the app) before I could set a custom DNS server, since some those features are implemented via DNS.

The main screen of the app gives a view of the your internet connection (with a built-in speed test), access points, and the devices connected to your network, as well as devices recently connected to your network but not currently. That last category is nice because it gives you a more complete view of everything, even if, say a smart TV doesn't happen to be turned on right now.

You can give devices "nicknames" to more clearly identify them, as well as indicate what type of device they are (such as Laptop, Network Equipment, Game Console, Security Camera, Light Bulb and many others), which will assign them an appropriate icon and group them into categories. The result, frankly, is beautiful. 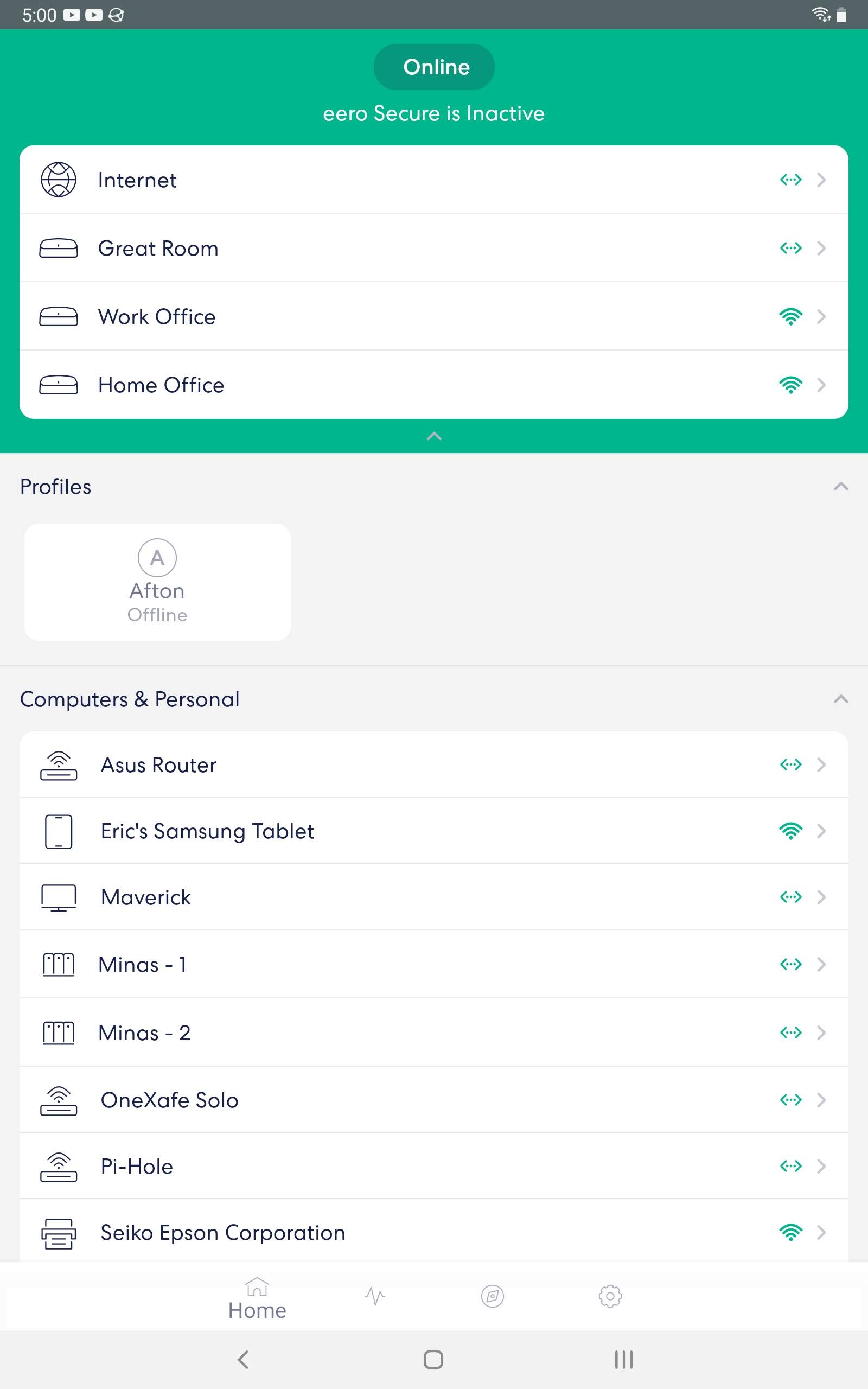 My Asus router had a way of naming devices, and some icons for different kinds, but it feels clunky in comparison. People had even created entire custom icon sets to try to get a nicer-looking client list on the Asus.

I was a bit stumped on giving devices nicknames at first. There's clearly an edit field, but there was no "Save" button, and just leaving the screen didn't automatically save. I even went to the support web site, which said:

Gah! There is no Save button. Is this a bug? There had been a Save button in other parts of the app. I sent an email to support, and they responded the next day saying, "After you tap the name field and type in your nickname simply tap the enter/done key that's on your keyboard on your phone." OK, that works, and also let me know that support requests get handled in a timely way (at least the easy ones).

Another thing I like is the Activity screen, which shows data usage per device or per profile (a group of devices associated with a person). This is fantastic. 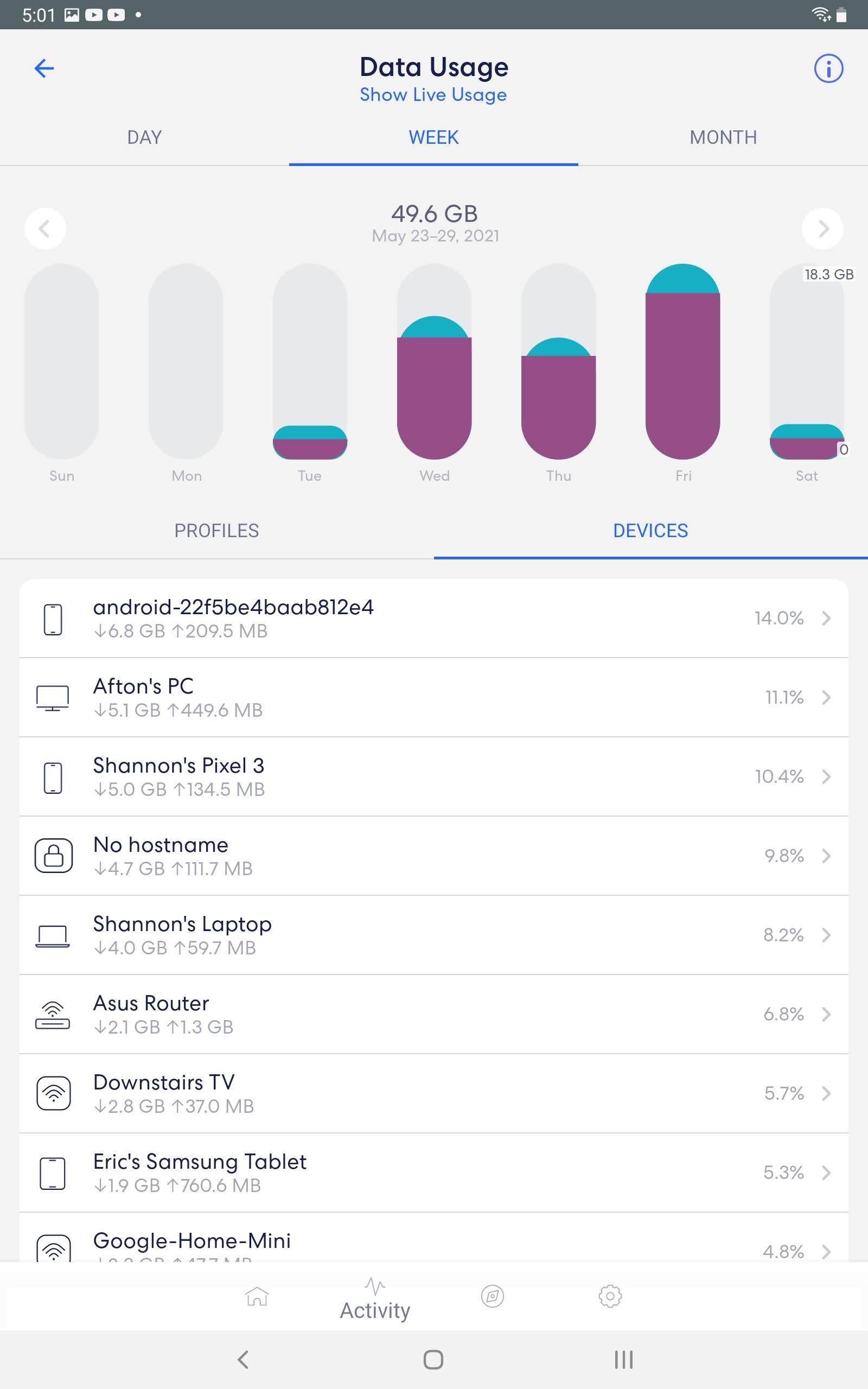 A couple of months ago, I got a data cap warning from Comcast -- I had nearly used all of my allotted bandwidth for the month. I looked at the historical monthly usage graphs on the Xfinity site, and could see that usage was up significantly that month, but I had no idea why. How can I tell what was eating my bandwidth? From my research, unless your router keeps track, you don't have much chance of figuring it out, and the Asus router did not.

I haven't done a lot of detailed testing, but I can say that there isn't anywhere in my house that doesn't have full Wi-Fi bars. I can even walk down the road 150 feet from the edge of my property and still have a signal. It makes me hope that allegations Wi-Fi is bad for your health are unfounded, because I am fully awash, but otherwise I'm pretty happy.