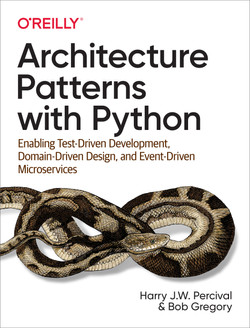 Architecture Patterns with Python by Harry Percival and Bob Gregory

I learned about this book by watching Harry Percival's 2020 PyCon talk Stop Using Mocks (for a while). In the past, I was pretty enthusiastic about mocks, especially in Python because they, along with patching, let me test just about anything, often without needing to alter the structure of my code to do so. Mocks can certainly be a useful tool, but in recent years, I've become a bit disillusioned by mocks for being brittle and ugly:

So how do you test your code without mocks? Trying to answer this has led me into reading about "Clean Architecture", "Hexagonal Architecture", "Ports and Adapters", and "Functional Core, Imperative Shell". The book mentions these as well, summarizing all of them as variations on the dependency inversion principle, or in short, decoupling your business logic from the technical details necessary to build an application.

The first part of the book uses a fairly simple domain problem to build up an architecture to support that simple case and also greater complexity where the trade-offs of the architecture make more sense. And the authors try to be clear about what the trade-offs are, and when it is appropriate to use the techniques presented.

If your app is essentially a simple CRUD wrapper around a database and isn't likely to be anything more than that in the foreseeable future, you don't need these patterns. Go ahead and use Django, and save yourself a lot of bother.

That isn't being dismissive of Django as some kind of framework for lesser developers -- it is a recognition that Django is really awesome at CRUD apps, but can get in the way for different kinds of apps. The authors also include an appendix specifically for applying some of the patterns when using Django.

The technologies used in the examples happen to align with those used in my current project at work such as Flask, SQLAlchemy and PostgreSQL. This is great as some of the specific technical advice is directly applicable for me, but the book is ultimately about more than using popular technologies of today.

An important take-away for me from the first part of the book is the sweet spot for testing: at the service layer, which implements the use cases of your application and that could be called from an HTTP endpoint or a gRPC or a CLI. I had thought that the core domain model was where you should focus on testing, but the authors said:

Tests are supposed to help us change our system fearlessly, but often we see teams writing too many tests against their domain model. This causes problems when they come to change their codebase and find that they need to update tens or even hundreds of unit tests.

I just did a refactoring of some of our database tables at work. The API for the application, did not change. But it took me more than a month to fix all of the broken tests caused by the change. It is clear that our architecture and testing strategy are sometimes a hinderance to change rather than a help.

The second part of the book is about event-driven architecture. It doesn't go much down the event sourcing road, but rather as a way of decoupling parts of the application, even if storage is used in a more "traditional" way.

One surprise here was seeing events used as essentially control flow with a really simple event bus implementation rather than being asynchronous. I'm not totally sure if you can get away with that if you're writing a web application and some of the event handlers could take a while to execute, but it made me realize that the decoupling is still possible even with synchronous handling. Later on they use Redis as an event broker for some asynchronous events, but the techniques are not mutually exclusive.

Another surprise was the chapter on CQRS (Command-Query Responsibility Segregation) where the authors suggest using raw SQL to produce views of data (a section title is even "Hold On to Your Lunch, Folks"). Having worked with people who despise ORMs, I can understand that doing complex queries with an ORM sometimes feels like suffering twice: Once to figure out the query and again to figure out how to translate the SQL to the ORM. This is an aspect of the book that I still need to wrap my head around.

I find it is kind of hard to practice architecture. If you work on a project for a long time, you don't get a lot of chances to see different systems. If you move quickly between projects you don't see the long-term consequences of your decisions. As a result, I really appreciate when people are willing to share their experiences. Architecture Patterns with Python has given me a lot to think about and proposed solutions to some of the very problems I'm facing right now. For me it has been a great read.

If you'd like to read it, you can do so for free here. Another free option is the GitHub repo for the book, where the issues section includes some questions from readers and authors' responses. Personally, I bought the DRM-free edition from ebooks.com because I knew I'd want to make some annotations while I read. That met my needs, but there were times when the text of the book implied a hyperlink that wasn't present, and one of the figures (9-1) was wrong. The online versions fix that.