The Windows MessageBox is really convenient to use. A single line of code gets you a dialog box with a caption, a message, an icon and a set of available buttons that cover a lot of possible input scenarios. Unfortunately, the text on the buttons is supplied by the system, so if you're building an application that is intended to be localized, you invariably end up with something that looks like a bug. 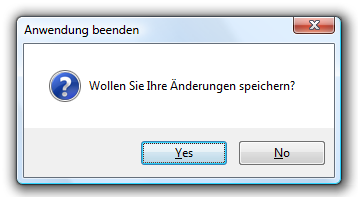 You're pretty much guaranteed to get an entry in the bug database for this. My typical response, over many years of writing Windows apps, is something like this:

This dialog's buttons are provided by the system -- we don't have control over the text. If you were running a localized version of Windows, the "Yes" and "No" buttons would be in the appropriate language. Thanks for the report, though!

I've written that more times than I care to admit before finally thinking, "Why don't I just write a MessageBox where the buttons are localized?" I'm starting to feel that just the savings in QA/development back-and-forth time would make the little effort worth it. And if someone wants to run your application in German, shouldn't it all be in German regardless of the Windows settings?

Unfortunately other common dialogs, like file dialogs, suffer from the same problem and aren't so easy to replicate.