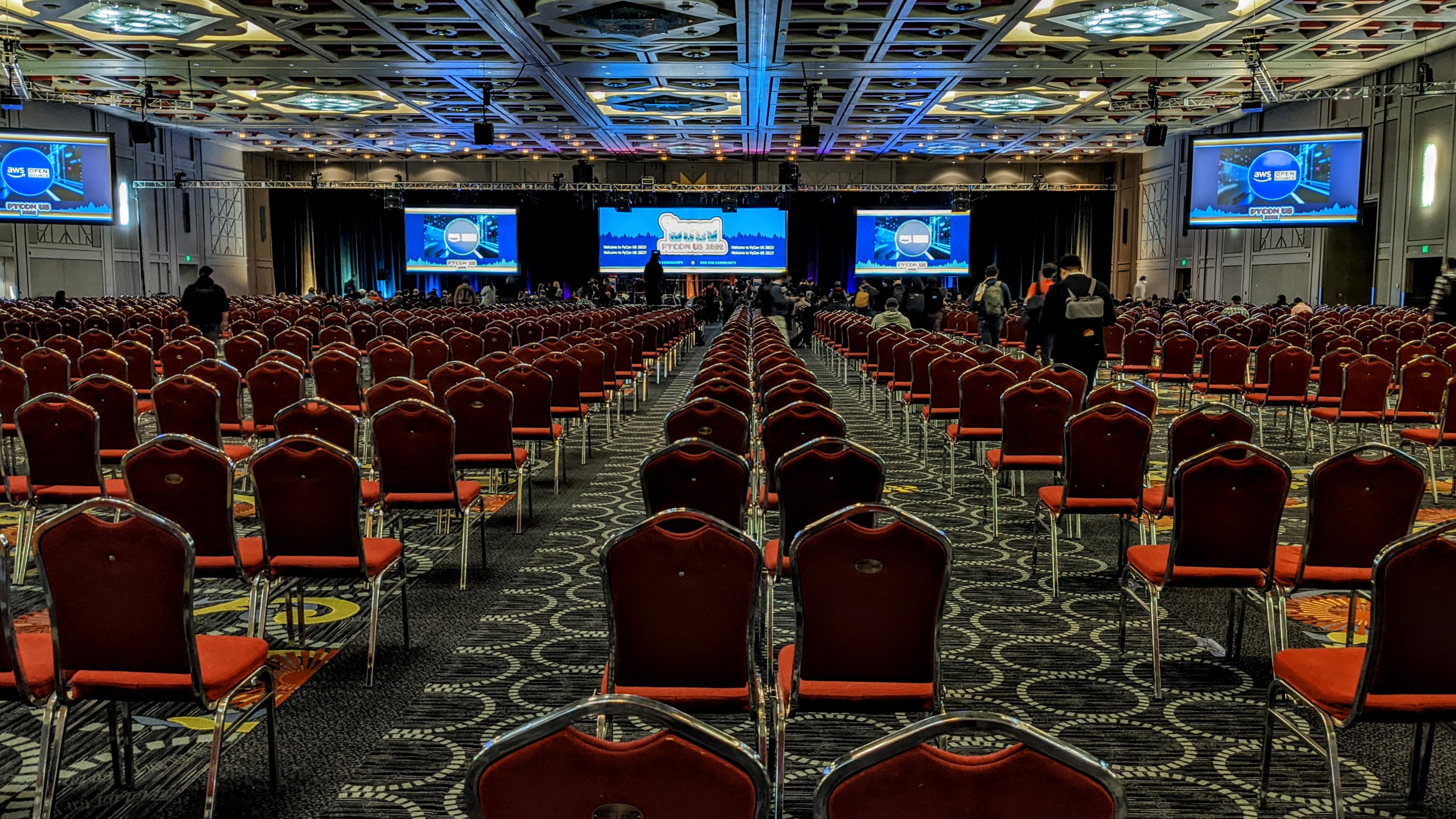 I wrapped up my participation in this year's PyCon last night. Being in Salt Lake City was great, since that's just a half-hour drive from my house, but it also means that I don't have the "completely focused on this" experience that traveling to a conference gives you. For example, I was on the verge of signing up for the PyLadies auction when registering for the conference, but then I thought I should probably just go home to my own ladies (wife and daughter) instead. And church and family commitments made it hard to attend anything today (Sunday).

Attending PyCon is a chance to learn, meet people, and feel the sense of community from a shared enthusiasm for a programming language... odd as that may seem. The Salt Palace Convention Center was simultaneously hosting a gymnastics competition, and a mom walking down the concourse with her gymnast children wondered aloud, "What is PyCon???" I considered stopping to answer her question, but I wasn't sure she really wanted to be accosted by a tech nerd. 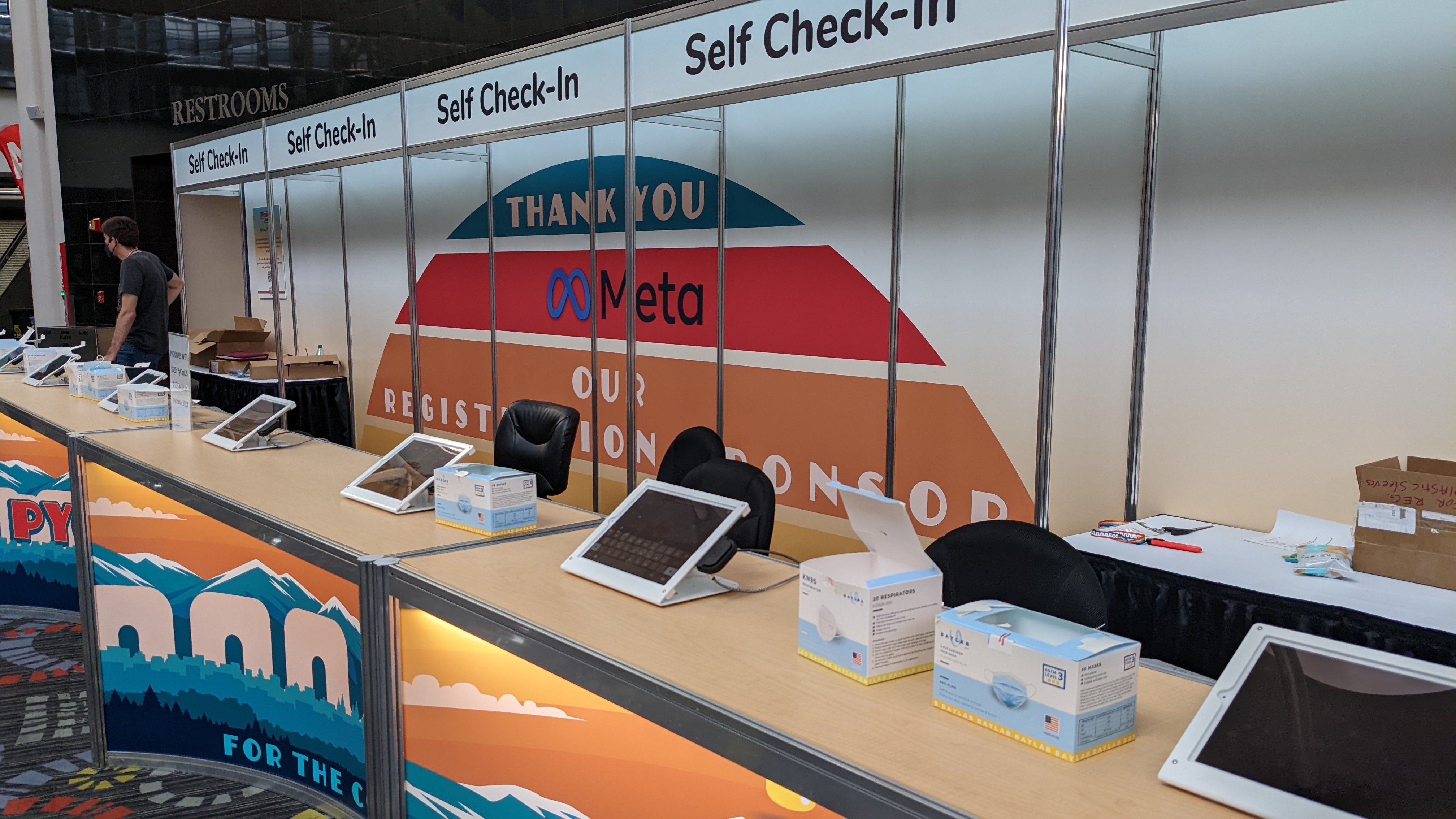 The registration desk, where I volunteered for a couple of hours.

The first keynote was from Łukasz Langa, the Python Software Foundation's Developer in Residence, and who is also known for creating the code formatting tool Black. His talk was pretty technical for a keynote, covering type annotations and how they make reading a codebase easier. Some people argue that type annotations are ugly and obscure the code, but Łukasz argued that if the annotations are ugly, that is an indication that the code may be ugly too. He gave some tips on making annotations (and the code) better such as by avoiding primitive obsession (everything is a str!) applying Postel's robustness principle and using more recent Python versions where simpler annotation syntax has been introduced.

Sara Issaoun, a NASA Einstein Fellow and astronomer spoke about imaging a super-massive black hole as part of the Event Horizon Telescope project. The image became famous when dozens of major news agencies put it on their front pages (or digital equivalents) in 2019. I had watched the Netflix documentary about this, Black Holes, The Edge of All We Know so was familiar with the project. Sara said that Python is a pillar of modern science, and enabled much of the data analysis. She also teased that there will be an announcement from the project on May 12 related to our own Milky Way galaxy.

Peter Wang, from Anaconda, announced an alpha release of pyscript, a Python distribution targeting the browser. It is built on top of Pyodide. The goal is to make Python programming accessible to as many people as possible by building applications in a browser. Favorite random quote from the talk: "If you bash your head into the wall enough it will eventually turn into a pile of yaml." 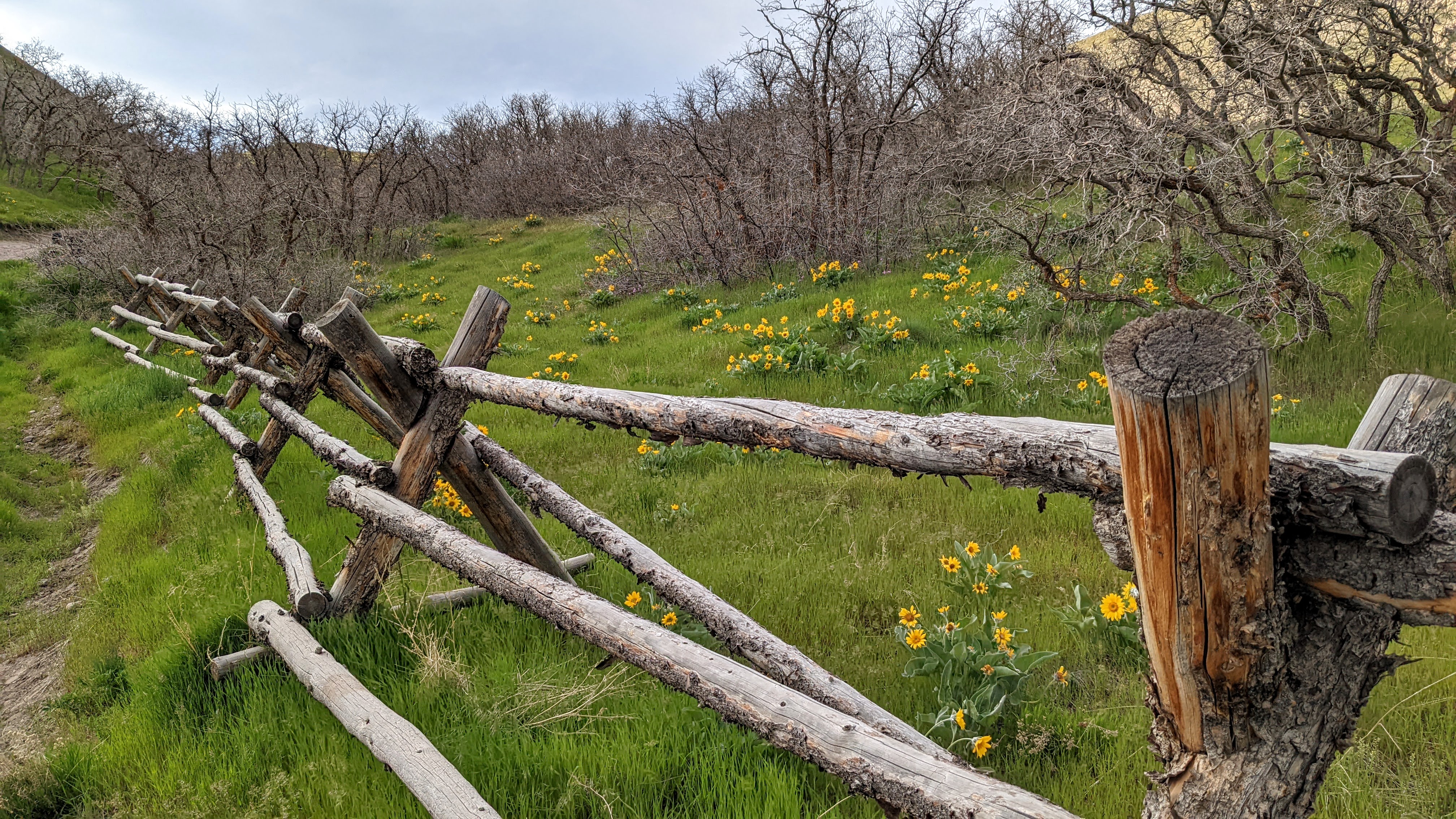 Wildflowers on the Ensign Peak Trail.

I went to a bunch of talks, but I'll just mention some favorites.

Brandt Bucher talked about structural pattern matching, which is a new language feature as of Python 3.10. As co-author of the PEP (along with Guido) and implementor, he was able to talk authoritatively on the subject. A couple of his main points: It is not a switch statement! And please read the tutorial PEP which introduces the concepts by writing a text-based adventure game.

John Reese, who builds developer tools for Meta, titled his talk "Open Source on Easy Mode", but had lots of good suggestions for any project in terms of tools and project configuration. Since he is the maintainer of μsort, I asked for his take on why we bother sorting imports at all. He gave a couple of reasons: Sorted imports are easier to find by visual scanning, and having an automated consistent ordering discourages developers from wasting time micromanaging their imports by hand.

I mentioned meeting Bruce Eckel at the last PyCon I attended six years ago. He spoke about dataclasses, and how their use can tidy up some awkward code, especially in the context of verifying pre- and post- conditions. I've been stuck on Python 3.6 at work, so I haven't had much opportunity to use dataclasses yet, so it was nice to learn from his experiences.

As a side note, there was generally not a Q&A time after any of the talks. Presenters were instead encouraged to meet with people in the hallway to answer questions. I think that is a great format and I hope they keep it that way in future PyCons. Bruce did ask if people had questions at the end of his talk, and it was just evidence for why it isn't awesome as he got stuck trying to hear and understand a question from a non-native English speaker and failing to communicate. Having lived in a country where I was not a native speaker, I appreciate and sympathize with them, but the likelihood of meaningful discourse is much higher one-on-one than trying to shout across a large conference hall.

I coincidentally had lunch with Roman Yurchak and Hood Chatham before their talk on Pyodide (thanks for the apple, Hood!). After Peter Wang's keynote about pyscript, I was curious about some of the underlying details. What makes it possible is compiling CPython to WebAssembly. In addition to loading Python script files, they also have the ability to install pure Python packages via "micropip", as well as some popular packages that rely on extensions, such as NumPy and SQLAlchemy. There is also a foreign function interface with Javascript. I haven't dug into WebAssembly, but I sort of imagined that becoming the universal runtime with Javascript as one of many possible sources. I don't think that's reality (?). My impression is that the Pyodide project has taken on a huge challenge, and I hope it works out.

I think I would listen to A. Jesse Jiryu Davis on about any subject. His talks are always well-prepared and polished. This one was about async vs. threads, and that subject reminds me of this YouTube video (which is hilarious but has a few F-bombs). Yes, async is hip, and it is great for some situations, but sometimes its proponents fall into the trap of saying "new thing Y" is in all ways superior to "old thing X" rather than conceding that there are nearly always trade-offs. Jesse said that locks and events are kind of ugly, but showed how using ThreadPoolExecutor and Future can lead to beautiful and simple threaded code.

The last talk I want to call out is Anthony Shaw's, on writing faster Python code. He recommended the Austin and Scalene profilers for measurement, and then gave some specific examples of performance differences coding the same thing in different ways. A lot of Python devs are aware that comprehensions are faster than for loops, but it was a surprise to nearly all of us in the room that custom classes are generally faster than named tuples. 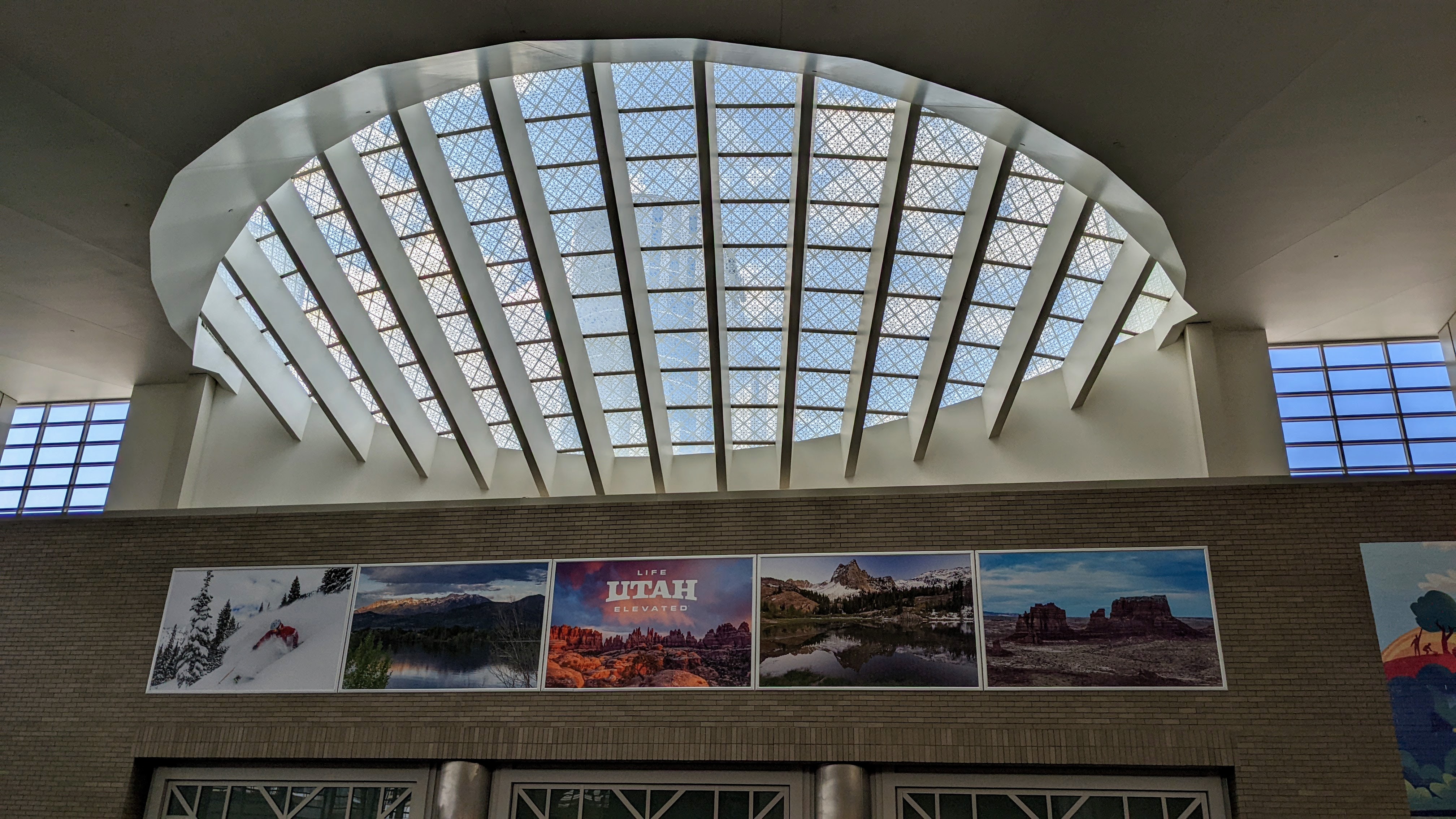 Inside the Salt Palace Convention Center.

Getting the chance to meet people is a pleasant bonus for attending PyCon. I'm very much an introvert, but push myself to sit with and talk to people I don't know at meal times. Sometimes conversations are bumpy at the start ("How's your PyCon going?") but then you find something to connect on and the initial awkwardness is worth it. Among many people and conversations, I met a woman who had traveled from Nigeria to the conference, talked to a guy who had done a tutorial on network analysis, heard a discussion about working in academia vs. industry, got a lead on potential job opportunities for my son who just got a C.S. degree this week.

In the conference opening, Emily Morehouse talked about being inviting and welcoming, specifically by always leaving an opening in a circle of conversation for someone else to join. I got to take advantage of such an opening when I stepped in for a few minutes of conversation with Guido van Rossum, Barry Warsaw, Łukasz Langa and a few others while they talked about the keynotes from Saturday morning. I didn't volunteer much (I'm an introvert, remember?) but it was still fun to be an average guy in that circle of really smart and distinguished people.